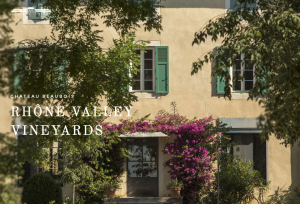 A paradox created by its specific terroir, Costières de Nîmes is both the southernmost and coolest AOC of the southern Rhône, creating distinctive and delicious wines. While it sits at the intersection of the Rhône Valley, Languedoc, and Provence, Costières de Nîmes wines are distinctly expressive of their specific, unique terroir. The region sits between the valley of the Gardon River to the north and the Mediterranean Sea to the south. The terroir of Costières de Nimes is similar to Château Neuf du Pape with rolled pebbles, but smaller and more numerous. The pebbles are light brown, the biggest ones are in the red plots to hold the warmth at night and the smallest ones in the rosé and white plots to preserve the freshness providing both good fruit and acidity.

Cuvèe Expression Rouge – French Biodynamic Wine – 70% Syrah Clos Terme, 20% Grenache Clos Réussite, 10% Marselan. Pleasant nose of blackcurrant, blackberry, liquorice.  On the palate, the wine has soft tannins with aromas of red fruits, liquorice, flower and spices. A tasty and supple wine which could be served throughout the meal, with vegetables, meat and cheese.

There are two primary influences in the Costières de Nimes region, weather and climate. The southern temperatures create a Mediterranean climate, but the strong Mistral wind cools at the hottest hours. The cold, dry and fierce Mistral wind blows down from the north along the lower Rhône River valley toward the Mediterranean Sea. This hot climate sucks in the crisp air of the sea and brings freshness and humidity throughout the day. A marshy plain called the Petite Camargue provides direct exposure of the vineyards to the sea, creating a unique microclimate for these Biodynamic Rhone wines.

The terroir is composed of pebbles which are detached from the Haut Brianconnais in the Alpes during the Quaternary. The Rhone and the Durance have transported those pebbles to the first exposures of the sea. The combination of the rocks maintaining heat, then being cooled by the Mistral winds of the sea creates an oven effect, causing warm air to rise and bring the cool sea breeze into the vineyards. It gives the wines a taste of saltiness and iodine especially on the white and rosé, but also slightly present in the reds. Château Beaubois Cuvee Expression wines have less alcohol than Côtes du Rhones wines and are more balanced due to the terroir and climate. They are truly salivating wines. 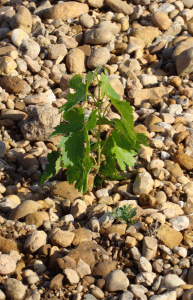 The characteristic of the superb terroir is the sum of many factors:

Vines have been found in the region that date back 6000 years BC with remains of the Volcs (wine grown for their own consumption) from Greek winegrowers. The Romans followed, creating the first cooperatives. History shows they would harvest in different places and vinify in one. By the 12th century, the The Moine Cisterciens (terroirs finders) ran the region’s vineyards and an abbey. The abbey was situated 200 meters from the estate of Château Beaubois but was destroyed during the Revolution. The vines at that time were distributed among 250 owners. Costières de Nimes became an AOC in 1986, and is known by wine experts as one of the best kept secrets of the Rhone Valley.

Château Beaubois was first established as a working winery from 1920-1947 by Margueritte and René Mouret. He was a country doctor on horse, and she was one of the first women in the region to manage a winery. “They have registered the first pages of our family history on this terroir. Leaving the cooperative in order to vinify the first parcels of the winery.” 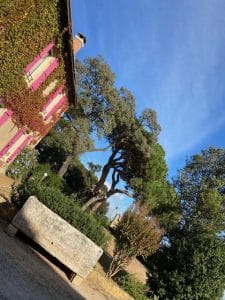 Originally the chateau was surrounded only by a multitude of different trees. Today Château Beaubois is still surrounded by 20 hectares of woods and the Domaine is the barn of the Abey. They also have a second name of Château which is Château Grange des Beaubois – roughly the castle of the barn in the trees.

Today, Fanny Boyer works with her brother François and they are the 4th generation winemakers at Château Beaubois.

The family acquired this Domaine in 1920 and they are celebrating their 100 anniversary in 2020.

The Boyers are pioneers in this appellation, first to go Terra Vitis (20 years ago) and first vineyard in HVE3 (10 years ago) on the department when this certification is starting to bloom in France since last years.  The winery has been certified organic since 2009 and in conversion towards Biodynamic since 2019. The last four vintages have also been Certified Biodynamic.

We are currently taking pre-orders for Château Beaubois Cuvèe Expression Biodynamic Rhone Wines. Look for them to arrive at retailers and restaurants in early 2021.