We’re celebrating International Women’s Day on March 8, and March as Women’s History Month with a salute to our fabulous women winemakers. 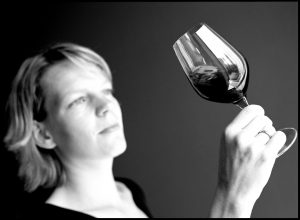 Angela Michlits is one of our outstanding women winemakers, and the primary winemaker for biokult from Pamhagen, Austria. From the beginning Angela was in charge of all the winemaking and vinification processes. While their three children are at school, Angela spends her day in the cellar with her colleagues. She understands the use of traditional wine growing and winemaking techniques and has developed them in modern ways. Angela and her husband’s search for establishing the best conditions and thus letting nature do its best work for the wines without excessive human intervention is very innovative and contemporary, while hearkening back to ancient practices.. Read more here about Angela and biokult. 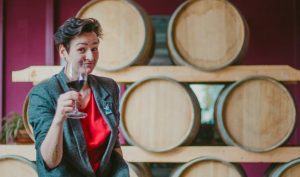 Veronica Pareja, Winemaker and Cellar Chief for Bodegas Familiares Matarromera, helped to develop the award-winning organic wines from the Ribera del Duero, Rueda and Toro regions of Spain. She has produced more than 10 vintages at Bodegas Familiares Matarromera since the 2011 vintage. She attended ETISAM (Higher Technical School of Agricultural and Forestry Engineers) of the University of Córdoba as an agricultural engineer, then completed a Master of Enology in Valladolid and a Master of Innovation in Madrid. Veronica previously worked at the University of Córdoba and as a technician in the Regulatory Council of the Montilla Moriles Denomination of Origin. “One of the things I like the most about making wine is that you are always learning. Each vintage is different, but our wine must maintain a standard. In the vineyard we see influences of weather, microbiology, the type of pruning that is done … and once in the winery we must pamper those grapes until they reach the consumer.” 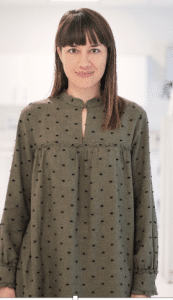 Maria holds a graduate degree in Chemistry  from University of Valladolid and Master’s degree in Innovation from the EOI. After a few years as coordinator and manager of R&D projects, in the field of polyphenol research, process development and environmental projects, she become the manager for the Environment and Sustainability area of ​​Matarromera family wineries, a department that she directs and coordinates everything related to energy efficiency of all our wineries including photovoltaic installations, and development of improvement plans in the entire sustainability area (resource control, waste water treatment, waste management, sustainable mobility, adaptation to climate change…).  She also manages the different environmental certifications that the organization has, with the aim of minimizing greenhouse gas emissions. Most recently Maria has taken over the management of the WIN Non-Alcoholic Wine production facility. WIN Alcohol Free is the result of a research project of several years and whose process was patented. In it, a system known as Spinning Cone Column is used, which minimizes any loss of aromatic elements from the wine while extracting aromas and alcohol. 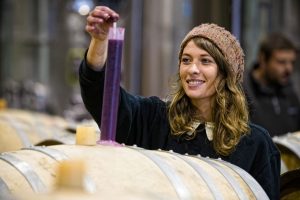 Our French organic wine partners at Maison Raymond hired Cellar Master Elodie Gilles in 2017, straight from famed Champagne house Veuve Clicquot. Elodie chose to become a Cellar Master because of her passion for wine and a desire to get closer to the final product. She comes with impressive credentials. Elodie holds a Master 2 in viticulture, terroir and environment. As Cellar Master, she is responsible for every aspect of the organic wine production from the time the grapes arrive at the winery to the time the bottled wine is shipped out. She works with the winemaker, Yohan Lafon, to create wines that reflect his taste and style, while imbuing important aspects of femininity into the wines. Elodie helped to develop her namesake wine Elodie, a beautiful and feminine yet dynamic Cotes de Provence rosé.

Check out this video about the Strong Women of Bordeaux featuring Elodie! 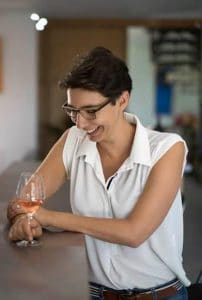 The lineage of women of influence and ownership at Chauteau Beaubois runs deep. Fanny Boyer and her brother François are the 4th generation to take over the helm of the winery. It began in 1920 with their maternal great grandmother and great grandfather Margueritte and René Mouret. Margueritte was the first woman in the region to manage a winery. Their grandmother and grandfather Lucie and Pierre Mouret took charge in post-war 1947, where they began bottling in the 70s and opened a wine shop at the vineyard in the 80s. In 1985 their parents Jacqueline and Jean Marc Boyer replanted nearly the entire vineyard, renewed the wine-making equipment and started the export business. Fanny is the current winemaker, having originally wanted to be a jeweler in her youth, but gravitating to viticulture by the age of 16. Fanny studied at the Nimes Agricultural School for Viticulture and Oenology, then went to study in Agropolis in Montpellier for 2 more years in oenology and wine business. She and her brother both held many positions at various vineyards before coming home to be the winemaker at the family estate. “The best day of the year for me is the day of trying all of the blends. I stop tasting new wines in the cellar for 30 to 40 days just to discover again the new wines of a new vintage and start a new page to build the range again that year.”

After completing her degree in oenology at Geisenheim University in 1997, Dorina Lindemann moved with her husband, Thomas, to Portugal to join her father at the family winery. She used the existing vineyards from the grapevine breeding operations established by her father to produce her own organic wines of Quinta da Plansel and systematically extended the vineyards as part of a targeted expansion program involving the production of propagation material. Decades’ worth of experience were quickly passed from father to daughter. Today, Dorina and her two daughters, Luísa and Julia, enthusiastically advocate Portuguese wines vinified from the grapes of autochthonous varieties, especially those from the Alentejo region. Site-specific adaptation of grapevine varieties to the terroir of Quinta da Plansel, often referred to as “precision viticulture,” is an integral part of the estate’s success story.

Famous Women of Wine Throughout History 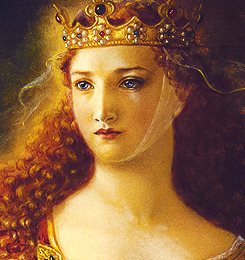 The Duchess Eleanor of Aquitaine lived in the 12th century during the ages of Robin Hood and was known for her high-spirited nature. As a member of a powerful royal family, she ruled the entire region of Southeast France and was one of the wealthiest women of the time. A fan of fine wine, Eleanor single-handedly started the import of Bordeaux wines to England. She’s been played by several women over the years in Hollywood films including Katharine Hepburn and Glenn Close. Read the whole juicy story of Eleanor here. 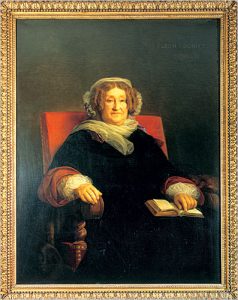 Widowed in 1805 at the age of just 27, Barbe-Nicole Clicquot, née Ponsardin, took over her late husband’s business and turned it into a thriving wine house. By developing a new technique known as riddling, or remuage, she was instrumental in creating early champagne. Her name remains on the famous yellow-labelled champagne bottles of Veuve Clicquot Ponsardin to this day.